“Over the years working for different companies I have had the pleasure off using Alex as a player at various clinics. For instance endorsing Trace Elliot amplification, a brand I used to represent in Denmark at the Forum’s Music Show, and every show was a crowd stopper due to Alex’s unique playing style. Alex has a rather solid live reputation in Denmark, but his 2 set,40 minutes show- clinics probably will give you a clear understanding of his technique: six string bass, plus possibilities adapted from highly developed Sticks “Touch Style”. So player can use ten fingers technique which can open many possibilities for new performing forms, for instance playing written bass and playing solo simultaneously.
Apart from grooves and examples, Alex does two numbers from Bassworks, both are among the best ones (Spa and bassunit3 ) and one an energetic take on “Summertime”.
And let me finally say that if I ever need a tapping instrumentalist – bass player for that kind off stuff, I would not hesitate to use Alex again.”
By K.E.Damgaard/Fender A/S Denmark

Alex is a Fender rep. in Denmark. 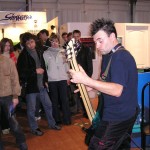 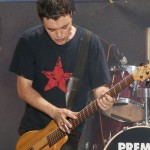 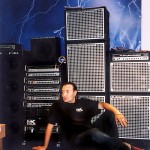 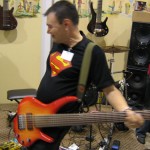 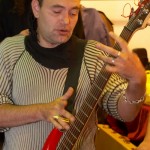 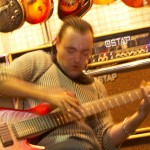